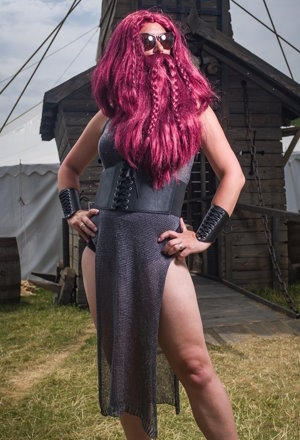 We've had a few challenges along the way but its been fun!

I am the news hound / graphics designer / Hushed Hogfather organiser / social media manager and Jason rangler for Discworld Monthly. I am Doctor Watson to Jason's Holmes, Robin to his Batman and Penny to his Inspector Gadget...

I joined Discworld Monthly as a subscriber and then became a member of the Facebook Group where I eventually became co-admin with Jason. I was able to spend more time online so became, for the most part, the sole admin of the group for a while.

I am also the creator of The Discworld Collectors Guild Archive which attempts to archive all Discworld merchandise (well as much of it as we can!)

I met Jason for the first time at the 2014 Discworld Convention where we fell in love. We now live together and are go married in a wonderful Discworld themed wedding in 2017.

Our mutual love of Terry Pratchett brought us together. Thank you Terry you've helped us in more ways than you could have ever imagined.