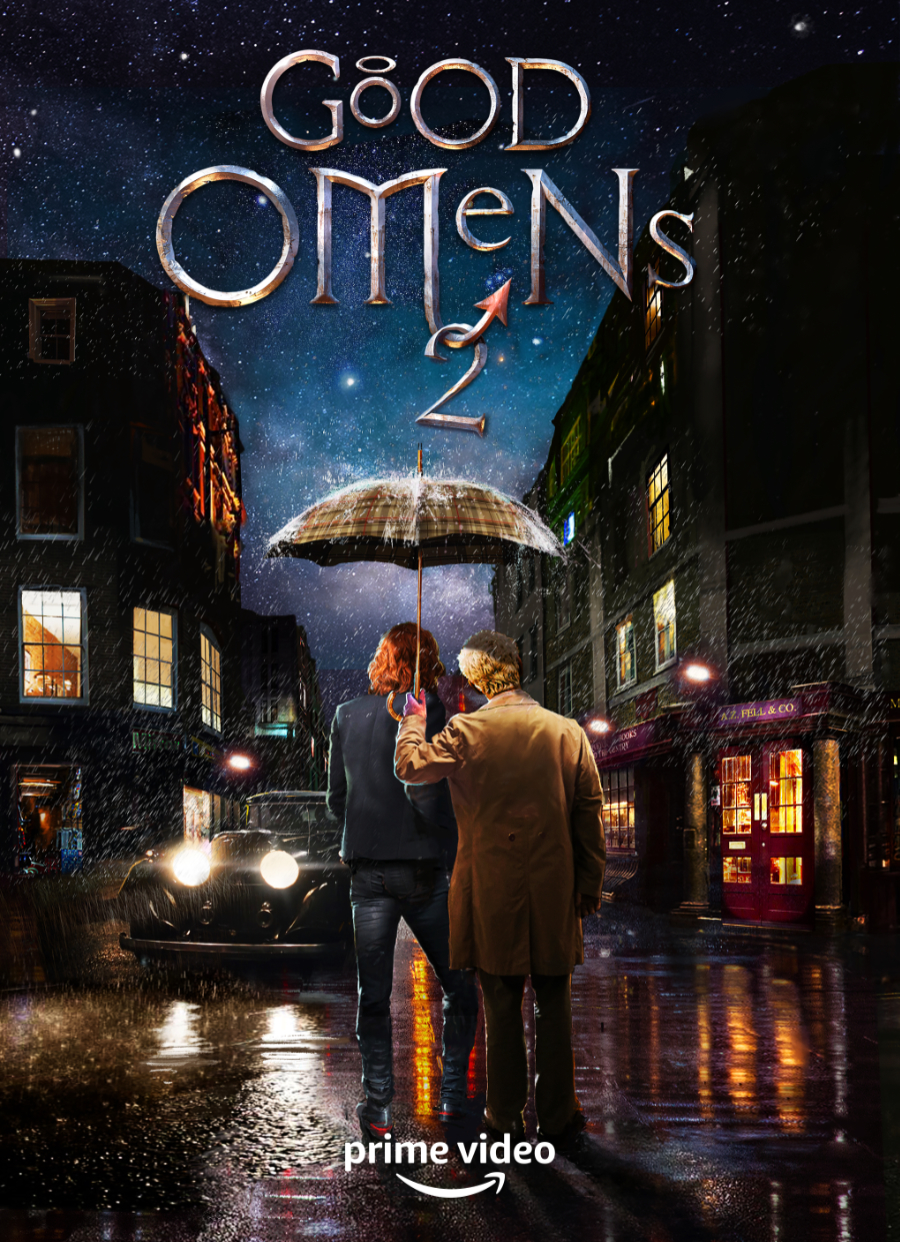 BBC Studios and Amazon Studios have announced the greenlight of global fan-favorite series Good Omens for a second season.
Multi-award-winning actors Michael Sheen, (Quiz, Staged) and David Tennant (Des, Staged) are confirmed to reprise their starring roles as the angel Aziraphale and demon Crowley, an unlikely duo that teamed up to save the world from the apocalypse.
The second season of the six-part humorous fantasy drama will begin filming later this year in Scotland and will premiere on Amazon Prime Video in 240 countries and territories around the world at a later date.

The new season will explore storylines that go beyond the original source material to illuminate the uncanny friendship between Aziriphale, a fussy angel and rare book dealer, and the fast-living demon Crowley.
Having been on Earth since The Beginning and with the Apocalypse thwarted, Aziraphale and Crowley are getting back to easy living amongst mortals in London’s Soho when an unexpected messenger presents a surprising mystery.

Neil Gaiman continues as executive producer and will co-showrun along with executive producer Douglas Mackinnon who will also return to direct. Rob Wilkins, John Finnemore and BBC Studios Productions’ Head of Comedy Josh Cole will also executive produce with Finnemore serving as co-writer alongside Gaiman. Good Omens is based on the well-loved and internationally bestselling novel ‘Good Omens’ by Terry Pratchett (Hogfather) and Gaiman. The new season is produced by multi-award winning BBC Studios Productions alongside Amazon Studios, Narrativia and The Blank Corporation.

Neil Gaiman says: “It's thirty-one years since ‘Good Omens’ was published, which means it's thirty-two years since Terry Pratchett and I lay in our respective beds in a Seattle hotel room at a World Fantasy Convention, and plotted the sequel. I got to use bits of the sequel in Good Omens -- that's where our angels came from. Terry's not here any longer, but when he was, we had talked about what we wanted to do with ‘Good Omens,’ and where the story went next. And now, thanks to BBC Studios and Amazon, I get to take it there. I have enlisted some wonderful collaborators, and John Finnemore has come on board to carry the torch with me. There are so many questions people have asked about what happened next (and also, what happened before) to our favourite Angel and Demon. Here are the answers you've been hoping for. We are back in Soho, and all through time and space, solving a mystery, which starts with an angel wandering through Soho, with no memory.”

Douglas Mackinnon says: “Taking Good Omens to my home country of Scotland to film a second season is an exciting dream come true for me. And with Michael Sheen and David Tennant returning as Aziraphale and Crowley, we really have an angel and a demon on our side.”

Rob Wilkins says: “Terry and Neil always knew that Crowley and Aziraphale wouldn’t remain content to appear in only one story, and long harboured plans to expand upon their adventures. David and Michael’s stellar performances made this an absolute necessity. Terry would have been delighted with how they brought their characters to life, and just as delighted as I am that a second season is now underway.”

Michael Sheen says: “Personally I’m against it, but the world isn’t going to just save itself, is it? If David and I can manage to not fall out too badly this time it may even have a chance of getting finished.”

David Tennant says: “The return of Good Omens is great news for me, personally. As I get to work with Michael again, and I get to say Neil’s wonderful words once more. It’s probably less good for the universe as it almost certainly means there will be some fresh existential threat to its existence to deal with, but, you know - swings and roundabouts...”

Josh Cole, Head of Comedy, BBC Studios Productions, says: “We’re thrilled to be delving back into this iconic world. Neil Gaiman is that rare combination of brilliant collaborator and visionary storyteller, and, with John Finnemore on board too, the Good Omens audience are in for an absolute treat. We’re delighted to continue our relationship with Amazon Studios, and thank them for making this possible”.

With this announcement, Amazon Studios continues its relationship with Gaiman, who has an overall deal with the studio.

BBC Studios Productions has been the home of British comedy for over half a century and is responsible for many of the greatest programmes of all time. From The Office, Absolutely Fabulous and Only Fools & Horses, to The Thick Of It, Little Britain and Monty Python. Current successes include BAFTA winning shows Inside No. 9 and This Country, two series of Trying for Apple TV+, fantasy epic Good Omens for Amazon, Liam Williams’ Ladhood and Gbemisola Ikumelo’s BAFTA winning Brain in Gear for the BBC.

BBC Studios, a global company with bold British creativity at its heart, is a commercial subsidiary of the BBC Group. Award-winning British programmes made by the business are internationally recognised across a broad range of genres and specialisms, with brands like Strictly Come Dancing/Dancing with the Stars, Top Gear, Doctor Who and Bluey. BBC Studios has offices in 22 markets globally, including ten production bases in the UK and production bases or partnerships in a further nine countries around the world. The company, which ordinarily makes around 2500 hours of content a year for both the BBC and third parties including Apple, Amazon and China Mobile, is a champion for British creativity around the world. It is also a committed partner for the UK’s independent sector through a mix of equity partnerships, content investment and international distribution for programme titles. To the BBC, BBC Studios contributes both cash dividends and funds for programme-making, supporting the licence fee and enhancing programmes for UK audiences.

Prime Video offers customers a vast collection of TV shows, movies, sport and more — all available to watch on practically any device:

Included with Prime: Watch thousands of popular movies and TV shows, award-winning Amazon Originals and other exclusives, sports, and more. Think UK-produced Amazon Originals such as Clarkson’s Farm, The Grand Tour and All or Nothing: Tottenham Hotspur, US hits like The Boys, The Marvelous Mrs. Maisel and Tom Clancy’s Jack Ryan; as well as exclusive TV shows like Star Trek: Picard, Nine Perfect Strangers and Little Fires Everywhere; movies like Coming 2 America and the Golden Globe-winning Borat Subsequent Moviefilm; as well as live sport including ATP and WTA Tour and US Open Tennis, the Rugby Union Autumn Nations Cup and Premier League football. All available at no additional cost as part of Prime Video, which is available in more than 240 countries and territories worldwide (offers and titles vary based on location). Watch More with Prime Video Channels: Prime members can add 70+ channels like Discovery, ITV Hub+, Eurosport Player, hayu, STARZPLAY and more — no extra apps to download; no long term contract required. Only pay for the ones you want, and cancel anytime. View the full list of channels available at Amazon.co.uk/channels. Rent or Buy: Enjoy new-release movies to rent or buy, entire seasons of current TV shows available to buy, with special deals just for Prime members.

Instant Access: Watch at home or on the go with your choice of hundreds of compatible devices. Stream from the web or using the Prime Video app on your smartphone, tablet, set-top box including Sky, Virgin, TalkTalk and BT, game console, or select smart TVs. For a list of all compatible devices, visit Amazon.co.uk/watchanywhere. Enhanced Experiences: Make the most of every viewing with 4K Ultra HD and High Dynamic Range (HDR) compatible content. Go behind the scenes of your favourite movies and TV shows with exclusive X-Ray access, powered by IMDb. Save it for later with select mobile downloads for offline viewing. Prime Video is just one of many benefits included with a Prime membership, along with unlimited fast free delivery options on millions of items as well as exclusive deals and discounts at Amazon.co.uk, exclusive content with Prime Gaming, access to ad-free music, Kindle ebooks, and unlimited photo storage. To sign-up or start a free trial of Prime visit: Amazon.co.uk/prime

Neil Gaiman is the award-winning author of books, graphic novels, short stories, and films for all ages, including the Oscar nominated Coraline. Some of his most notable titles include Norse Mythology, American Gods, The Graveyard Book and the Sandman comic series which is being adapted for television by Netflix and Warner Bros TV, with Gaiman as Adviser and Executive Producer. He was the writer and showrunner for the Amazon Prime and BBC Studios adaptation of Good Omens, based on the book he co-authored with Sir Terry Pratchett, and his script for Good Omens Episode 3, “Hard Times” won the 2019 Ray Bradbury Award, and Good Omens won the 2020 Hugo Award for Best Dramatic Presentation (long form). His novel American Gods was also adapted to a critically acclaimed, Emmy-nominated TV series on Starz. Born in the UK, he now lives in the United States.

Terry Pratchett was the acclaimed creator of the global bestselling Discworld series, the first of which - The Colour of Magic - was published in 1983. As a young journalist, Neil Gaiman was the first person ever to interview him. Terry's books have been widely adapted for stage and screen, and he was the winner of multiple prizes, including the Carnegie Medal, as well as being awarded a knighthood for literature. He died in March 2015.

About The Blank Corporation

The Blank Corporation is a multimedia production company who have produced American Gods for Starz, Good Omens for the BBC and Amazon, and Sandman for Warner Bros and Netflix, and have several other television series and films in different states of development.

Narrativia is the independent production company, launched in 2012 by Sir Terry Pratchett. The company owns and controls the exclusive multimedia and merchandising rights to all of Sir Terry’s works, including his Discworld characters and creations. The company is headed by Managing Director Rob Wilkins and celebrated writer Rhianna Pratchett. In 2019 Narrativia saw the release of the acclaimed television series, GOOD OMENS with Amazon Studios and BBC Studios, starring David Tennant and Michael Sheen, and based on the internationally best-selling novel by Sir Terry Pratchett & Neil Gaiman, and 2021 saw the announcement of the animated production THE AMAZING MAURICE with Ulysses Filmproduktion and Cantilever Media, starring Hugh Laurie, Emilia Clarke and David Tennant. Christmas 2021 will see the premiere of THE ABOMINABLE SNOWBABY, a traditionally animated festive special.