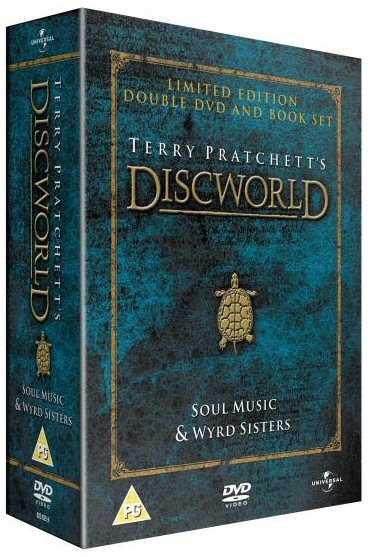 The Discworld DVD Box Set contains full length animations of Wyrd Sisters and Soul Music - acclaimed by Terry Pratchett, they are the only adaptations of the Discworld series ever and a must-have for all fans of Pratchett's work.

There's a weird music taking over the land - it's fast, it's furious and they call it The Music with Rocks in. And what's more, it's alive... Even more sinister, Death has disappeared, but who could possibly be qualified or willing to step into his black cape and wield the scythe?

The King has been murdered by an evil Duke partial to porridge, and a baby is missing from the castle. It's up to three unsual witches - Granny Weatherwax, Nanny Ogg and Magrat Garlick - to take magical and regal matters into their own hands...

Moist von Lipwig A fraudster and conman has to choose between being hanged, or put Ankh-Morpork's ailing postal service back on its feet. Not an easy choice to make...

But he's got to see that the mail gets through, come rain, hail, sleet, dogs, the Post Office Workers Friendly and Benevolent Society, the evil chairman of the Grand Trunk Semaphore Company, and a midnight killer.

Getting a date with Adora Bell Dearheart would be nice, too.

Maybe it'll take a criminal to succeed where honest men have failed, or maybe it's a death sentence either way.

Or perhaps there's a shot at redemption in the mad world of the mail, waiting for a man who's prepared to push the envelope...

Terry Pratchett is one of the best-selling writers of all time. He has sold over 40 million books worldwide. Before JK Rowling, he was the highest earning British author ever (The Times, 1996) and he is the only author to hold No 1 on paperback and hardback charts simultaneously. Awards include OBE 1998, 2000 Bookseller Award, twice Author of the Year and SFX Hall of Fame!