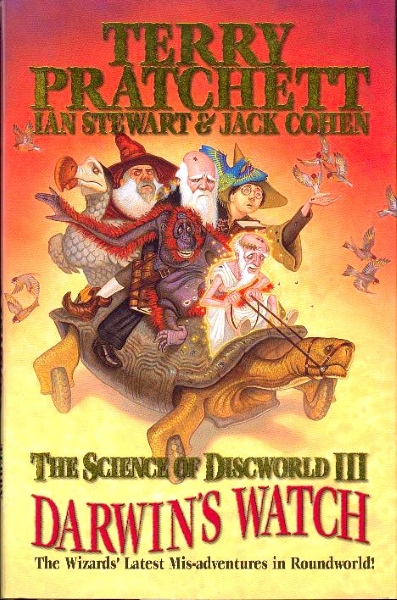 Roundworld is in trouble again, and this time it looks fatal. Having created it in the first place, the wizards of Unseen University feel vaguely responsible for its safety. They know the creatures who lived there escaped the impending Big Freeze by inventing the space elevator - they even intervened to rid the planet of a plague of elves, who attempted to divert humanity onto a different time track.

But now it's all gone wrong again - Victorian England has stagnated and the pace of progress has slowed right down. Unless something drastic is done, there won't be time for anyone to invent spaceflight and the human race will be just another layer in the bedrock.

Why, though, did history come adrift? Was it Sir Arthur J Nightingale's dismal book about natural selection? Or was it Mr Charles Darwin, whose bestselling Theology of Species made it impossible to refute the divine design of living creatures? Either way, it's no easy task to change history back, as the wizards discover to their cost. He's got to write a different book. And who stopped him writing it in the first place? What went wrong?

In Darwin's Watch, Terry Pratchett, Jack Cohen and Ian Stewart weave together a brand new fast-paced Discworld novelette with cutting-edge scientific commentary. The result is fascinating and highly entertaining. And tells the story of the evolution of evolution as it has never been told before...

Get The Science of Discworld III from: